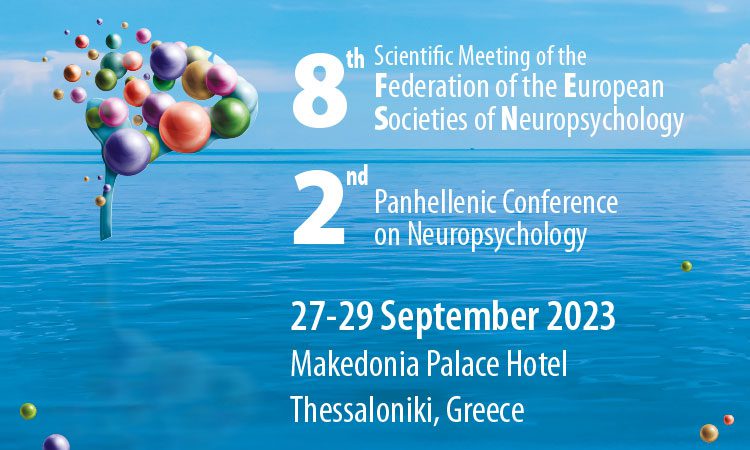 The Federation of European Societies of Neuropsychology (FESN) and the Hellenic Neuropsychological Society (HNS) are proud to announce the 8th Scientific Meeting of FESN & 2nd Panhellenic Conference on Neuropsychology to be held in Thessaloniki, Greece, on Sept. 27-29, 2023. We look forward to welcoming you in person! The meeting will offer world class researchers presenting new data on scientific and clinical topics relevant to neuropsychology as a field, as well as to both research and practice. We hope it will be an opportunity to reunite and to make new contacts for its members and other attendees alike. Specialists in a broad range of areas within neuropsychology and neuroscience, including keynote lectures, invited colloquia, paper and poster presentations will be featured.

Thessaloniki, also known as “the bride of the Thermaikos Gulf”, is a port city, the second largest city in Greece, boasting structures from antiquity to modern day architecture, as well as several universities and colleges. It is a culinary capitol, rich in history, as it is located at a crossroads between East and West. It is also known for its vivid nightlife, affordable eating and shopping. September weather is pleasant, beautiful beaches are easily accessible, and a range of accommodations (from AirBnB’s to luxurious hotels) are within walking distance of the conference venue. The city is easily accessible from most European capitals.

We look forward to seeing you at 8th Scientific Meeting of FESN & 2nd Panhellenic Conference on Neuropsychology in Thessaloniki in September 2023.

fesn-hnps2023@artion.com.gr
302310257801
https://fesn-hnps2023.gr
We use cookies on our website to give you the most relevant experience by remembering your preferences and repeat visits. By clicking “Accept”, you consent to the use of ALL the cookies.
Cookie settingsACCEPT
Manage consent