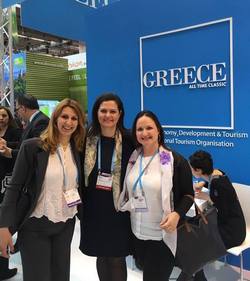 ARTION exhibited at IMEX 2016 at the Thessaloniki Convention Bureau Stand

ARTION, faithful to its’ policy for extroversion, traveled in April once again to Frankfurt to attend the IMEX exhibition, one of the most important global events in the meetings industry. ARTION welcomed international event professionals at the Thessaloniki Convention Bureau stand, while exploring new meeting trends and exchanging ideas & proposals with peers of the MICE industry. During IMEX, a meeting with the World PCO Alliance was held, where ARTION as a founding member had an energetic role in the discussions taking place at Le Meridien Parkhotel, Frankfurt.

We use cookies on our website to give you the most relevant experience by remembering your preferences and repeat visits. By clicking “Accept”, you consent to the use of ALL the cookies.
Cookie settingsACCEPT
Manage consent